When we decided to go to Merida, Mexico, to visit Dan’s friend and her husband, we knew it was a good idea, and we also wanted to do our own research on safety.

We had never been to Merida before, and as safety situations are constantly changing around the world, we wanted to go with confidence.

As it turned out, Merida is one of the safest, if not the safest city in Mexico, and that was something that definitely gave us peace of mind during our journey from New York City to Merida.

If you’re planning a trip to Merida and you’d like some more information on the level of safety or concern over crime, read on to find our real experience spending a month in this amazing Mexican city. 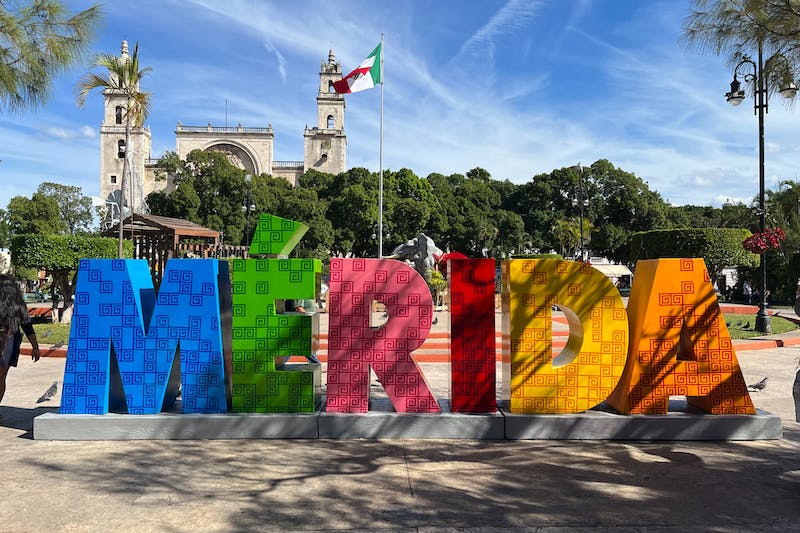 Is the Yucatan State safe?

The Yucatan State is quite safe, compared with other states in the rest of Mexico (which is very, very big!).

The big difference between Yucatan State and Quintana Roo is that Quintana Roo includes the locations of Cancun, Playa del Carmen, Tulum, Cozumel, Isla Holbox and the “Mayan Riviera.”

As you may have read, the Mayan Riviera (or in Spanish, “Riviera Maya”) has had a fair share of an increase in action since we last visited Tulum in 2017.

As I mentioned to a friend before we left for Merida that I was headed to “the Yucatan,” she sent me a recent article of a shooting in Cancun, and then my parents sent me an article about drug cartels in Tulum.

So, as you can guess, things keep changing in these beach areas, which are some of the most sought-after vacation destinations in the world.

Merida is the commercial center and largest city of the Yucatan State, which is off to the west of the Yucatan Peninsula, a piece of land in the Gulf of Mexico. 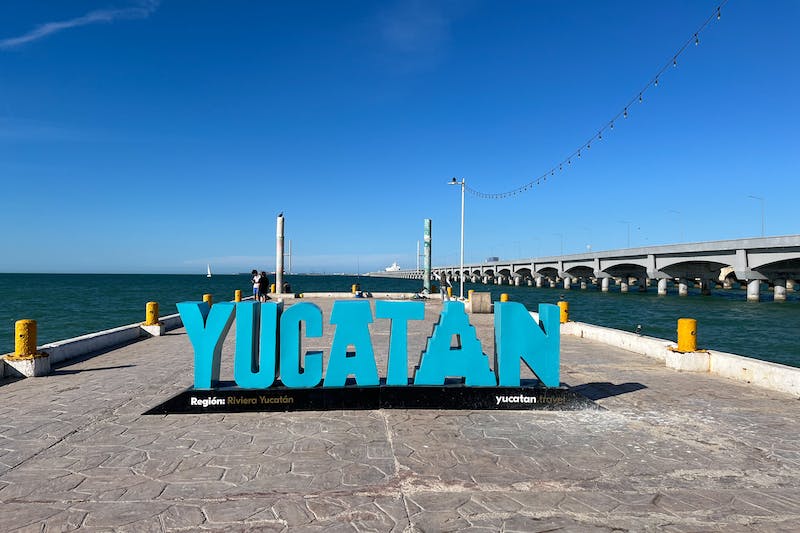 Merida isn’t like Tulum or Cancun at all. It’s more like a tropical Mexico City that’s located 30 minutes from the beach and has a fascinating mix of Spanish colonial and authentically Mayan-Yucatecan cultures.

The Yucatan State itself doesn’t suffer from the over-tourism problems that the Cancun area currently does. Fewer tourists find themselves in the Yucatan State, and for that reason, you may meet friends who say to you, “Merida? Where’s that?” before you leave home (we certainly did).

Overall, the Yucatan State has a relatively low crime rate with very few travel warnings and alerts. The entire state enjoys a certain level of peace and friendliness and this makes it an enjoyable place to spend time and travel. 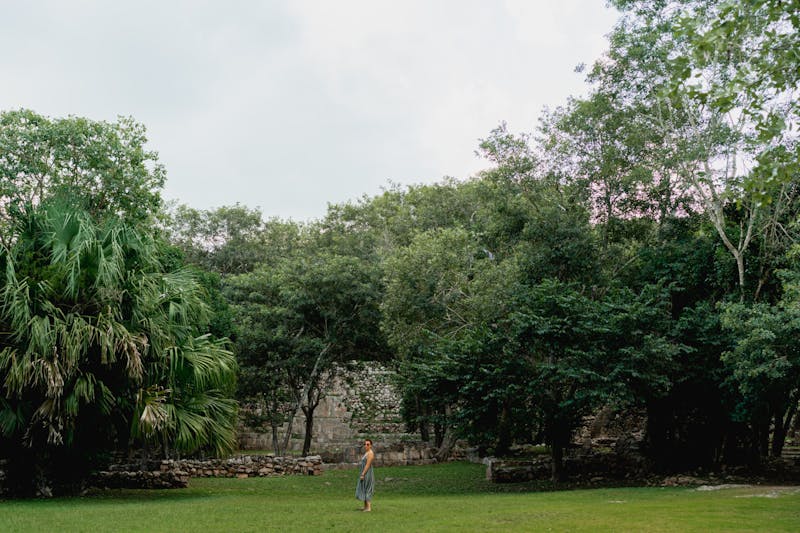 Is there crime in Merida, Mexico?

This is a question we had before we left for our trip, because it was hard to believe that the 12th-largest city in Mexico hardly had any crime.

But it was true.

Without jinxing anything, what we want to make clear is that Merida is a very safe place to be. This is why it is a haven for expats, early retirees, families with children, expats, digital nomads and travelers alike. 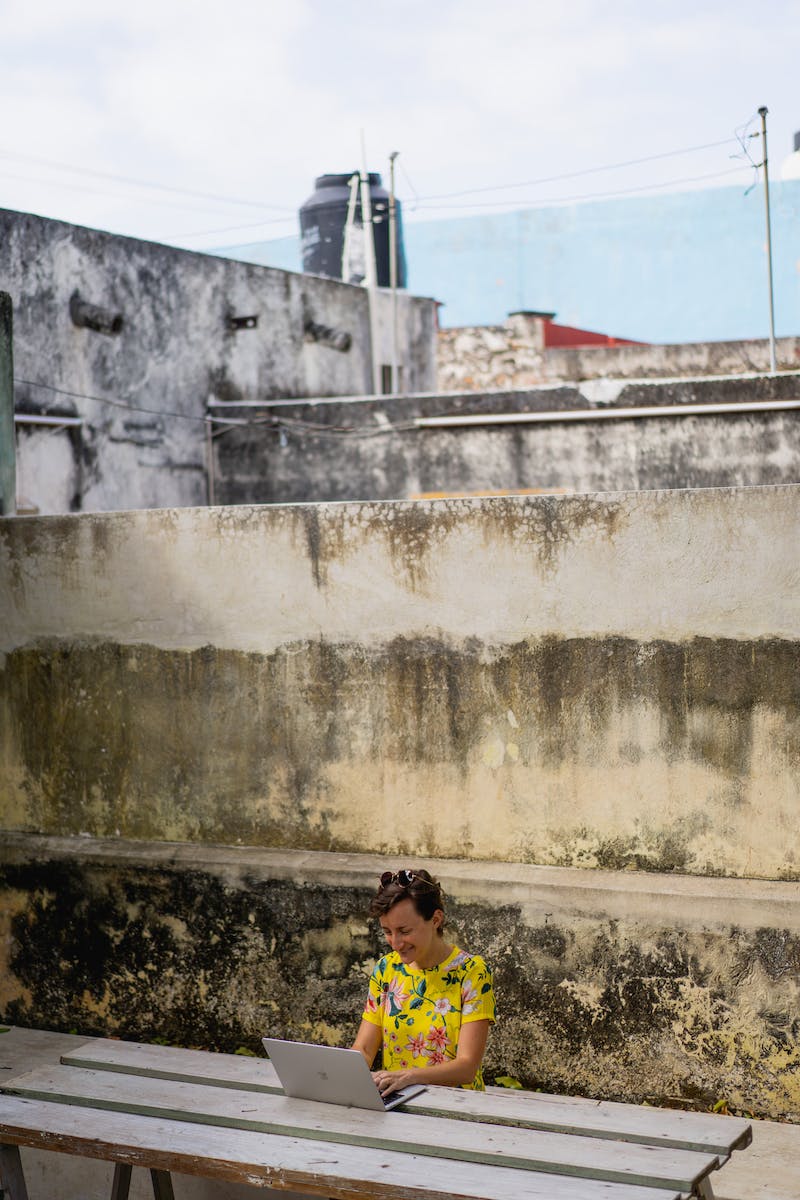 In 26 days, we did not experience any crime. In fact, we were hardly bothered by anyone whose attention we did not want.

Merida turned out to be one of the most hassle-free destinations we’ve ever been to, and we say this having been to destinations ranging from the equal safe-ness of Taipei to the pickpocket capital of Europe, Barcelona. 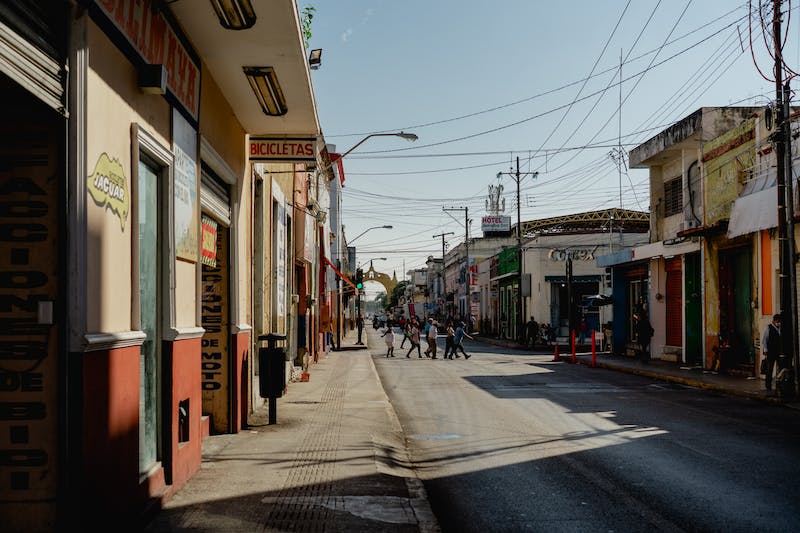 Is Merida safe at night?

Merida’s central and downtown areas are generally safe at night, so we can answer “yes” to this frequently-asked question about Merida.

Having stayed in Merida for a month during the winter, when the sun set around 5:30 pm, we had no choice but to walk around in darkness after our working hours at Conexion 60 coworking.

The safest areas for walking in Merida at night are the areas near Paseo 60 and the big-name hotels like the Hyatt Regency and the Courtyard by Marriott, the entire commercial stretch of Paseo de Montejo and the area surrounding Plaza Grande. These areas are generally friendly to tourists, well-lit and will have people on the streets from morning til evening.

Paseo de Montejo in particular is quite lively at night, with street vendors selling sweets, music performers at some intersections and quite a few bars and restaurants with outdoor seating til around 10 pm. 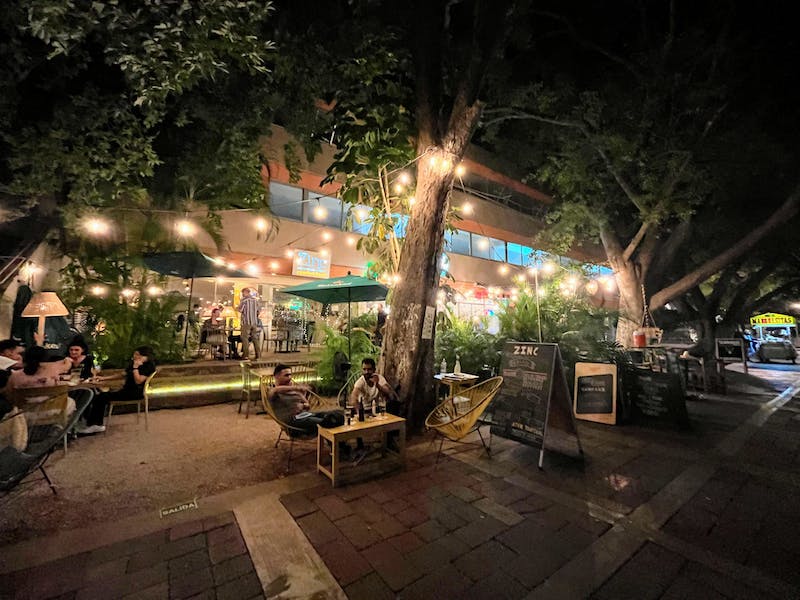 Where it gets a dab more seedy and the areas you may want to avoid are the areas past these main intersections. If you are concerned about safety, we recommend avoiding Calles 52 and 54 in the region of Calles 61 to 57 or so. These areas will not be as well-lit, and have some large parking lots, dark buildings and fewer residences.

To remain confident in your night walking in Merida, stick to well-lit and well-traveled streets, and you will have little issue.

You can also always take an Uber or Cabify for a very affordable price, and get where you’re going without hesitation.

Is Merida safe for women?

Merida is an impressively safe travel destination for women, even if you are foreign and don’t look like a local.

As a woman who would walk around both in the morning during rush hour and sometimes in the evenings to go buy food, I never at once felt unsafe.

Merida is known as a destination where women can be confident in walking around alone, and wearing Western clothing like short shorts and tank tops or sleeveless shirts (due to the heat, it’s quite necessary!).

We know various women who have traveled to Merida on their own or in groups, and would recommend Merida as a safe first-time travel destination. 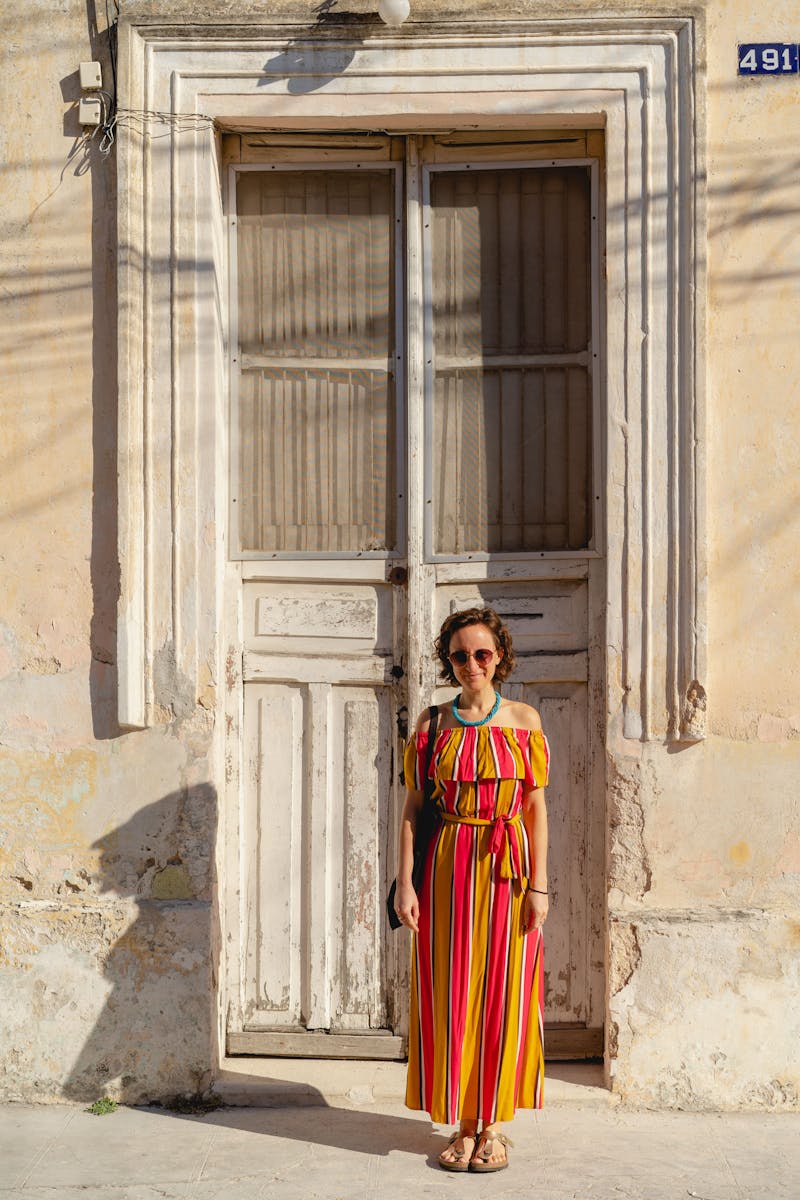 Is Merida safe for solo travelers?

Yes, Merida is a great and safe destination for solo travelers. In fact, you will find lots of solo travelers both young and old in Merida.

For solo travelers, it is very safe to stay in a hostel in any of the cool spots of the Centro Historico or downtown areas. Hostels generally have great safety measures like a buzz to get in with a camera at the door.

For more mature solo travelers who may be traveling and working remotely, we only met travelers who were very content with being in Merida for an extended stay.

Overall, solo travelers in Merida feel quite at ease, compared with other Latin American destinations. Solo travelers are rarely targets for crime, and while petty crime (pickpocketing or robberies) are possible, they are rare. 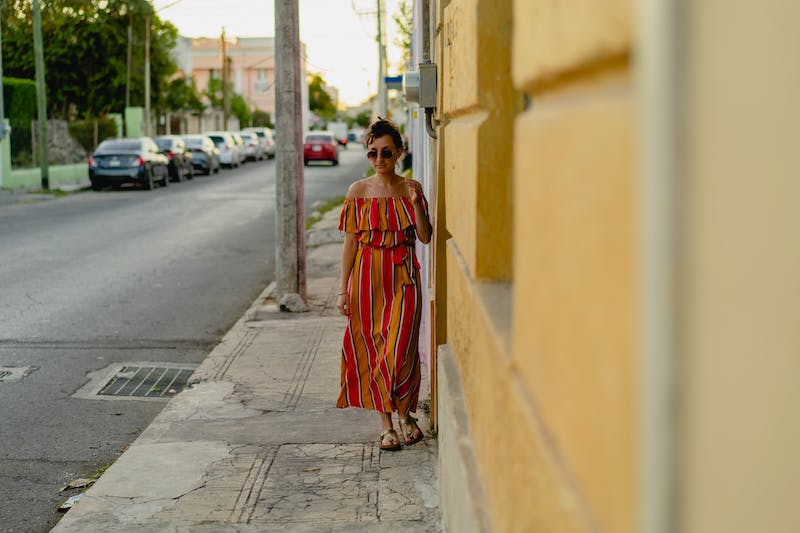 Is Merida safe if you don’t speak Spanish?

Merida is certainly a classic Mexican city and Spanish is the absolute language of communication, business and travel.

However, if your Spanish is shaky or needs work, you can hopefully get around with a few basic words.

We always recommend brushing up on the basics of any language needed for travel, and traveling in Mexico is no different. 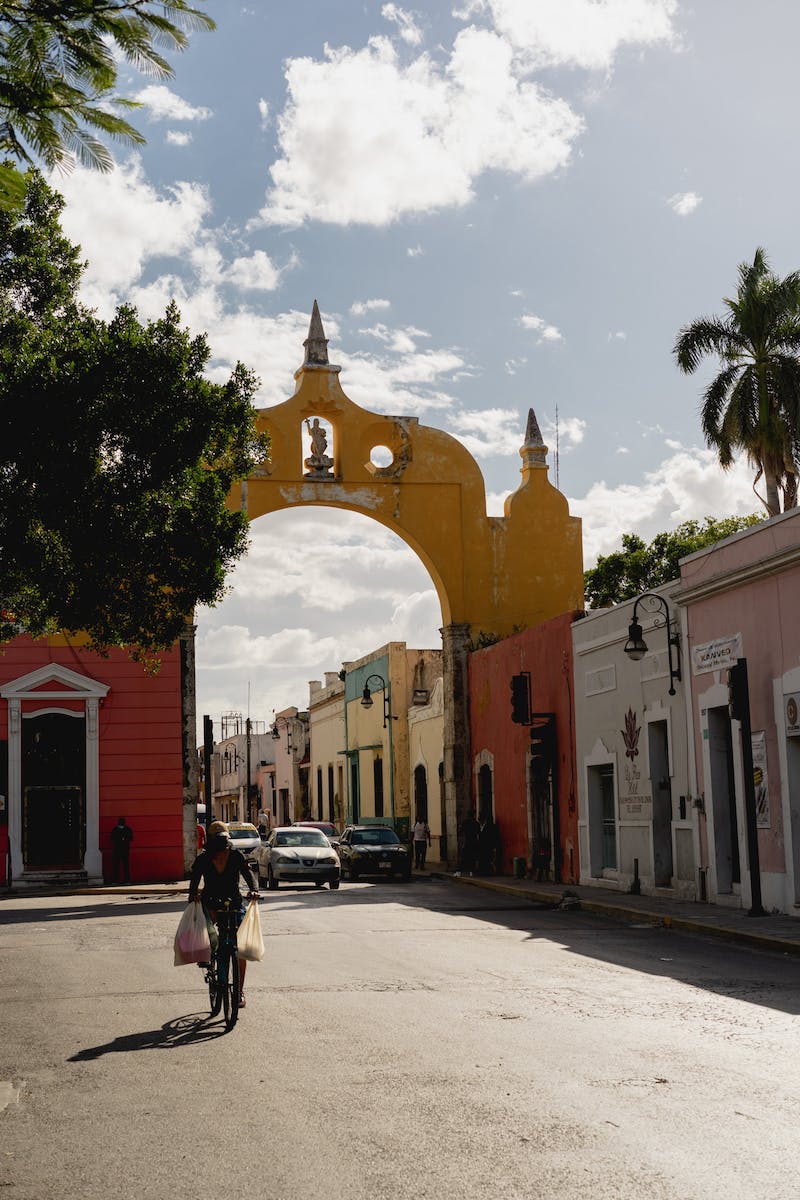 What you may be wondering is, if Merida is kind of near Cancun, could you get away with only speaking English and paying in US Dollars for what you need?

The answer to this is a definitive no: travel in Cancun is unique in that so many Americans land in Cancun, stay only in Cancun at resorts and go right back home to the US without every needing to speak Spanish to get around.

The beauty of an experience traveling in Merida is that the city is authentically Yucatecan and authentically Mexican. In the markets, little English is spoken, and in fact, we rarely had locals try to speak or practice English with us.

What you will see is the younger generations trying to speak English with you, or practice their English, if you’re in stores that cater toward English-speaking foreigners. Many of these such boutiques are found on Calle 60, or in Paseo 60’s upscale shopping mall, or in the tourist shops of the Centro Historico near Plaza Grande. 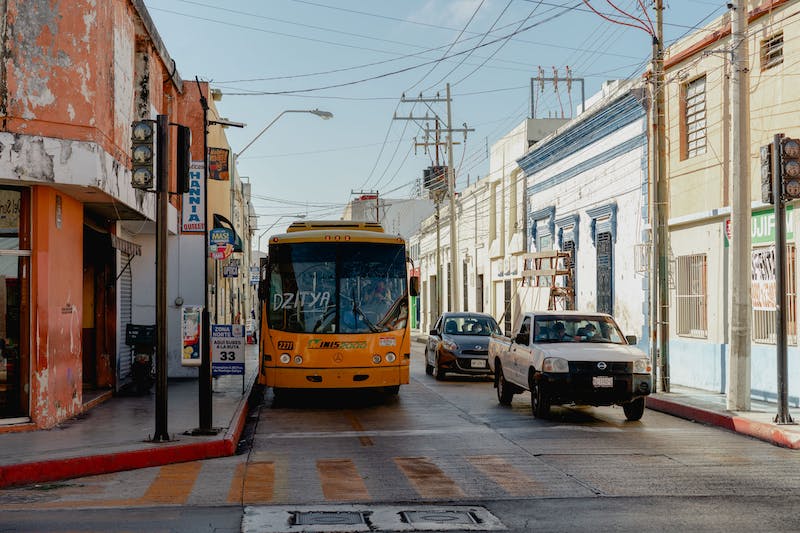