What to Do With a Layover in Madrid

Written by Becca / Photos by Dan

Despite having been to Spain various times in the past, we went to Madrid for our first time in a 24-hour whirlwind between flights. We packed in the sights on a hot summer day!

Having been to Barcelona and Valencia, Madrid was always on our list. We got the opportunity to fly to Madrid on a layover between New York City and the Canary Islands. Pro tip: New York City to Madrid is a typically an affordable flight path. Because we only had 24 hours, we wanted to take in as much as we could in our 1 day quick itinerary.

Where to stay in Madrid (on a budget)

We stayed at Barbieri Sol Hostel, and its best characteristics were the free breakfast and incredibly central location that served us well for exploring with limited time. 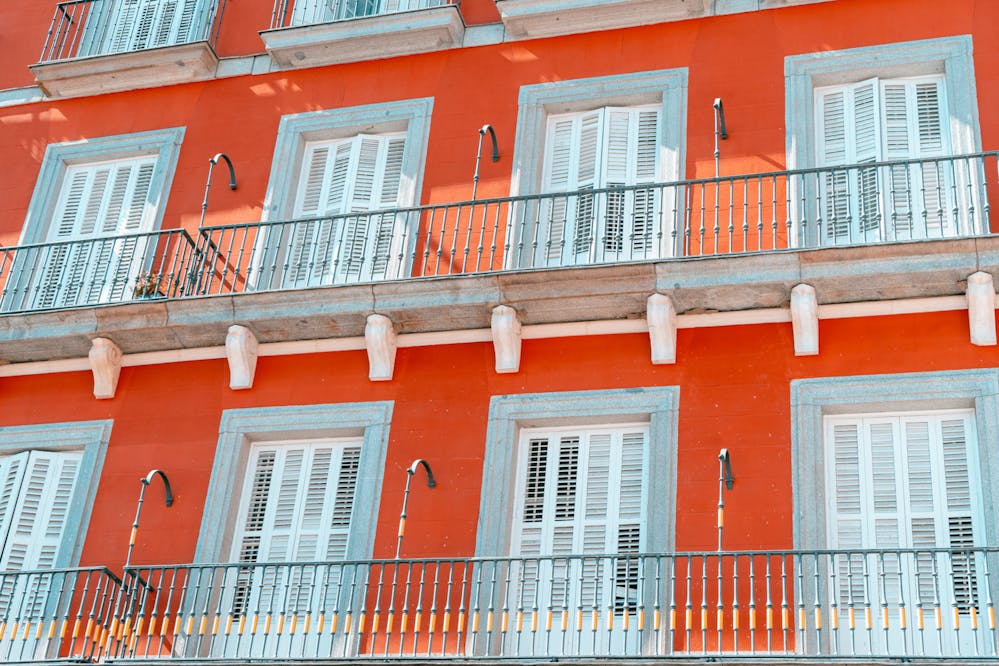 We took Madrid’s metro from the airport and the hostel was right off the Sol metro station. This was a strategic choice as we didn’t want to waste any time with unnecessary transit. We woke up at around 6am to catch our flight and took a taxi from the hostel. We didn’t want to risk a long wait for the metro.

How to make a 1-day itinerary in Madrid

As we were already located next to the central Plaza del Sol, we circled some main sights on our tourist map that we got from the hostel, and, despite the 95-degree Fahrenheit sunny weather, we set out with cameras and water bottles to go see the most famous sights. Our main goal was to see the palace and some parks.

We like seeing unique architecture and nature in city when we travel. We typically skip museums and shops unless we’re faced with rain or other bad weather. 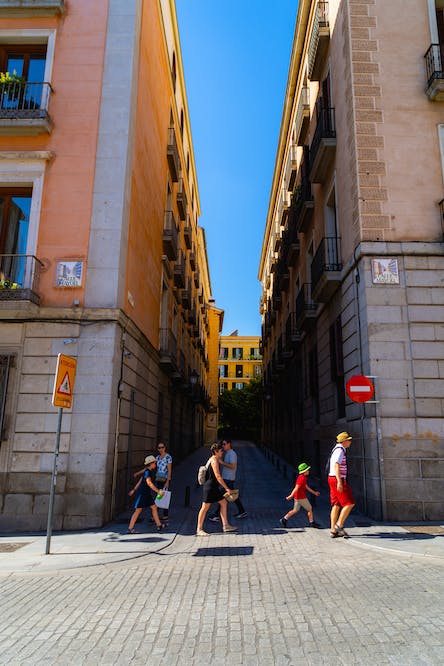 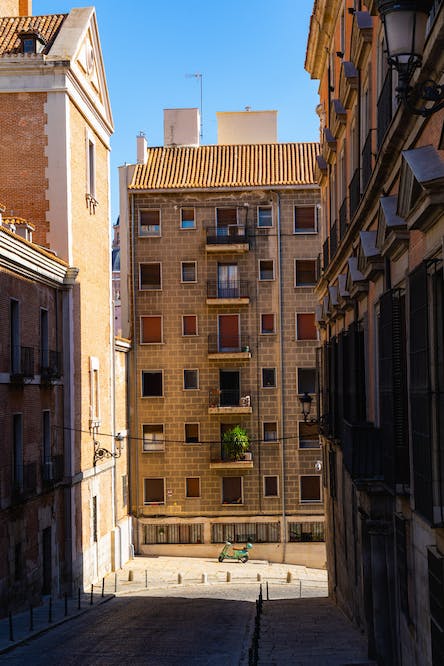 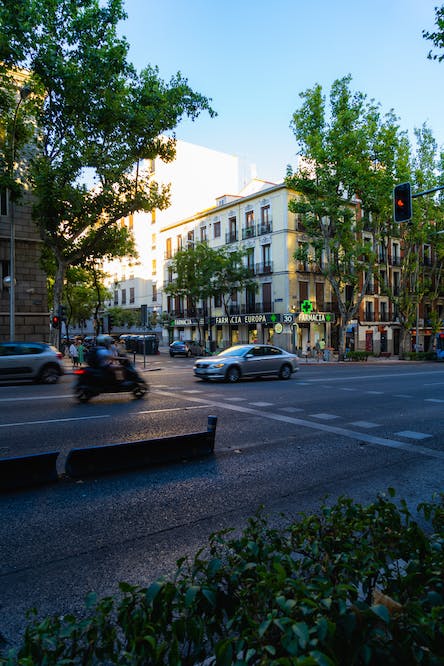 We found our way into Plaza Mayor, which is a giant plaza walled off by buildings on all sides. It’s really interesting! It was so hot that not many people were out walking around. This was good for us, because we love finding places to travel where you can avoid tourists. We continued for a few blocks to find the palace and basilica. 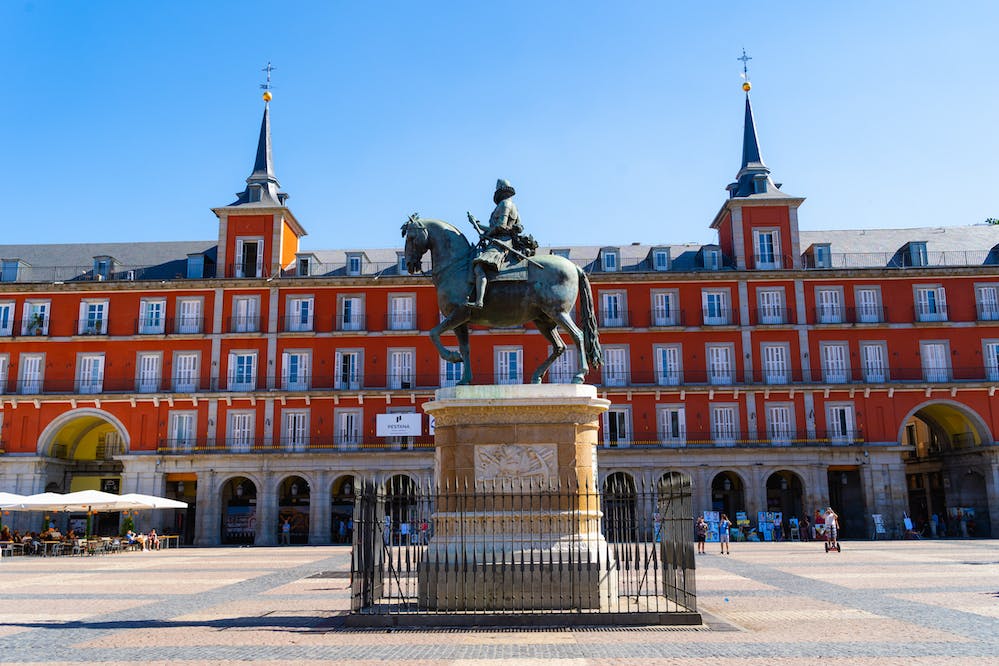 As we approached the palace and basilica complex, it was clear that we had arrived on a national holiday. None of the buildings were open! However, we got to cool off on the basilica steps and listen to a live violinist. It was also cool to get photos of the palace plaza with no one in it. 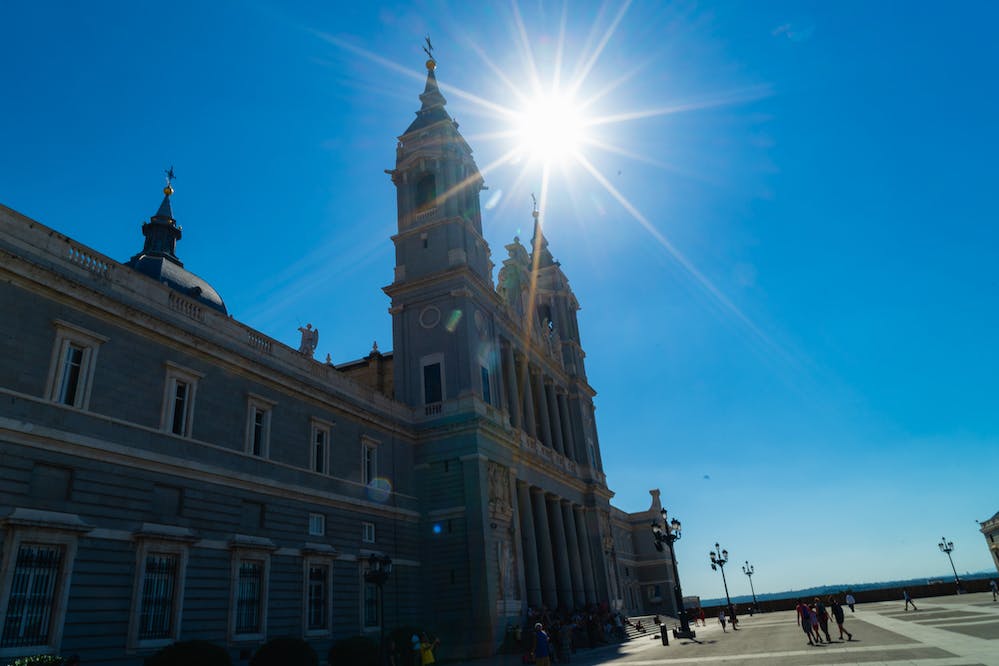 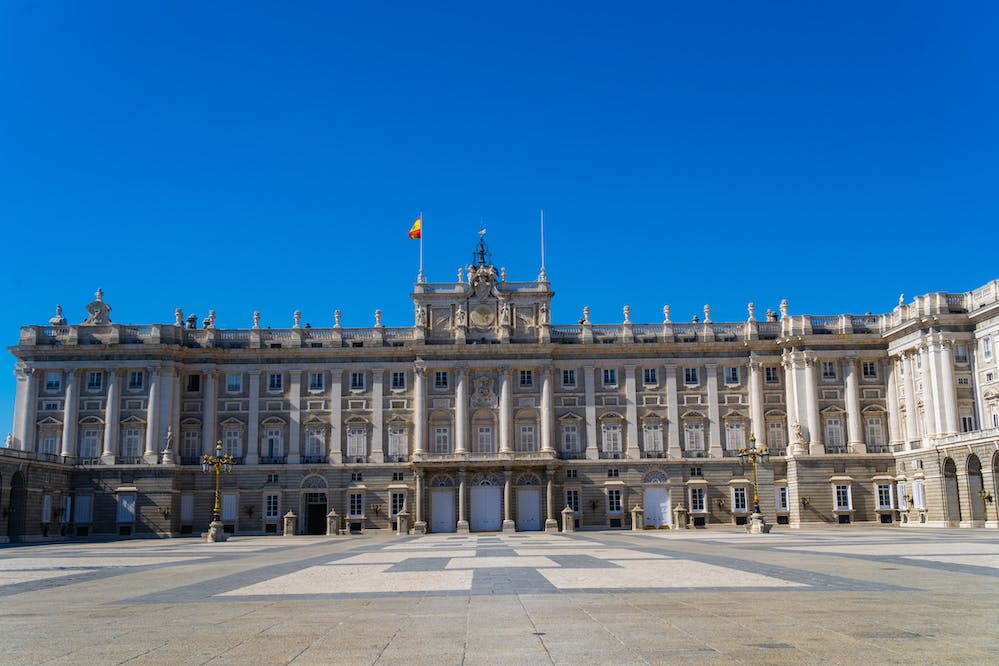 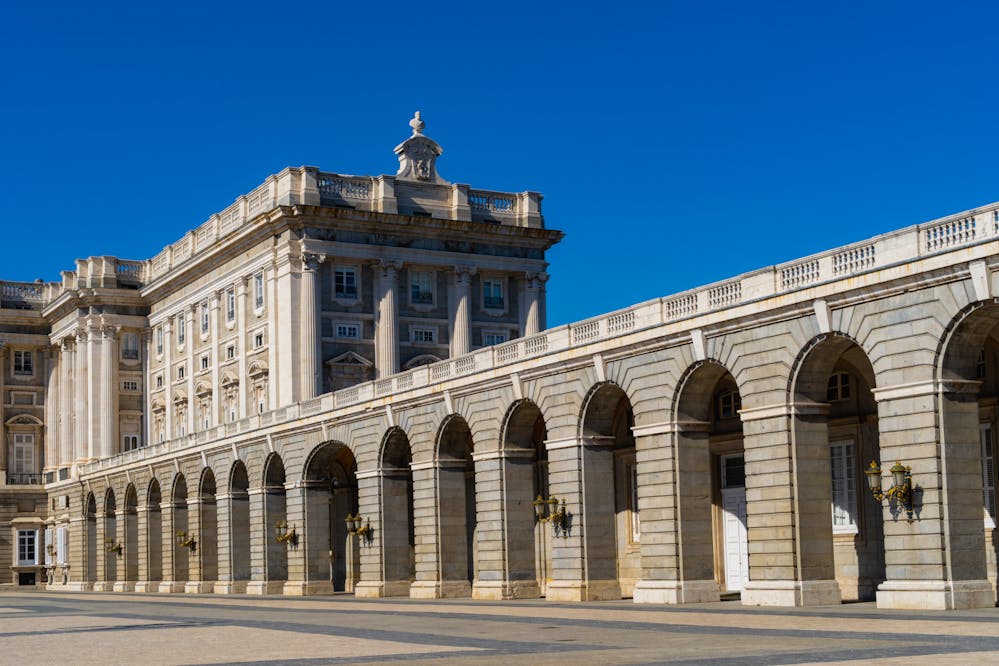 One of the most unique sights we saw in Madrid was the Templo de Debod, an Egyptian temple that was moved stone-by-stone from Egypt as a thank-you gift to the Spanish government at one point. It turns out to be one of the most popular locations for sunset photos in the city, and that’s because it has a reflecting pool. 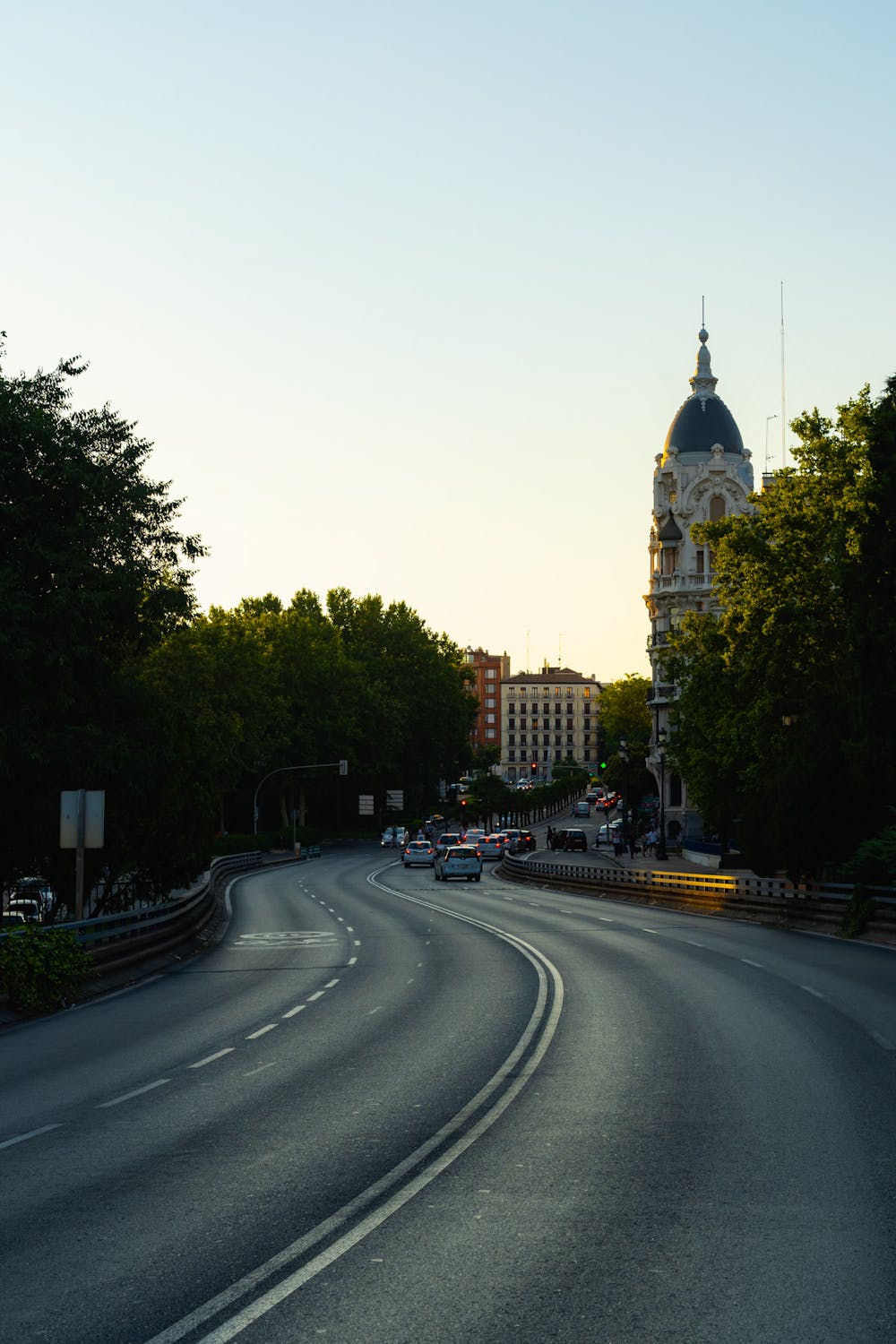 Parque de la Montaña is an excellent park for taking a break and has a diversity of plants, grassy areas, locals hanging out with after-work bottles of wine, pathways and a vista of a good bit of the city where you can watch the sun go lower to the west. We came back for sunset. 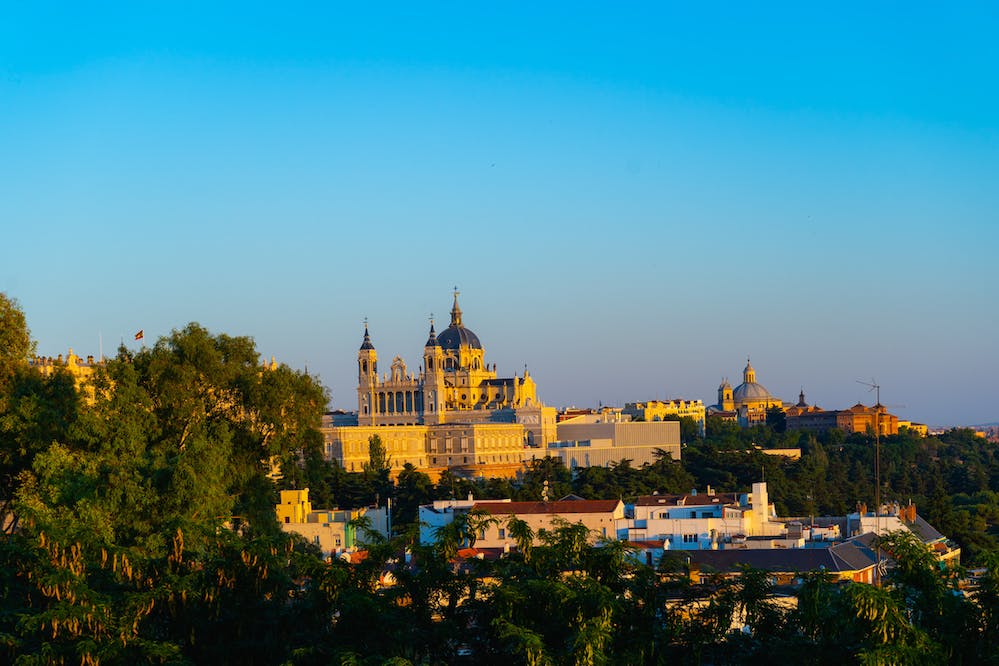 While we did not see all of Madrid by any means, we made the most of our long layover and got a good taste of what Spain’s capital is like!

Explore More of Spain
← All Travel Guides or photo galleries →