If you know us by now, you know we absolutely adore traveling in Mexico. We dream about the street food in Mexico City, the beaches of Tulum and the colonial gem of Valladolid.

During our travels in the Yucatan Peninsula, we knew we shouldn’t miss Chichen Itza, one of the New Seven Wonders of the World. The catch is that it’s one of the most-visited Mayan ruin sites in Mexico.

As two people who aim for taking perfect photos, we want to see beautiful places in the best light, and with the fewest number of other tourists. So, here’s how to beat the crowds at Chichen Itza National Park in Mexico.

Before you go, one of the best things you can get ahead of time is a guide book! Get the Lonely Planet guide book on Amazon or Bookshop.org

The best way to get to Chichen Itza

There are a few different ways to get to Chichen Itza, for each type of traveler. Most tour groups (avoid this) go from Cancun or Playa del Carmen by bus, very early in the morning. Both these places are a two or three-hour drive away. This sounds tiring.

We stayed in Valladolid, which we found was an excellent choice in terms of being close to Chichen Itza for the day we went.

How to get to Chichen Itza from Valladolid

By staying in Valladolid, you are only one hour away from Chichén Itzá. This makes getting there a whole lot easier.

Colectivos (small mini-buses that leave when they fill up) leave from the center of Valladolid. The first ones start leaving around 7:00 a.m.

Keep in mind that you might be cramped in a colectivo, and they’re not any sort of fancy bus. The driver likely won’t speak English, so it’s a great time to practice Spanish, or learn it.

There may or may not be air conditioning, so go with the flow and appreciate the local experience. Colectivos also usually stop along the way to pick up and drop off local people, cramming in as many people as physically fit. Enjoy!

If you take the first colectivo of the day, you will get to Chichén Itzá before it opens and you can be one of the first people in for the day. 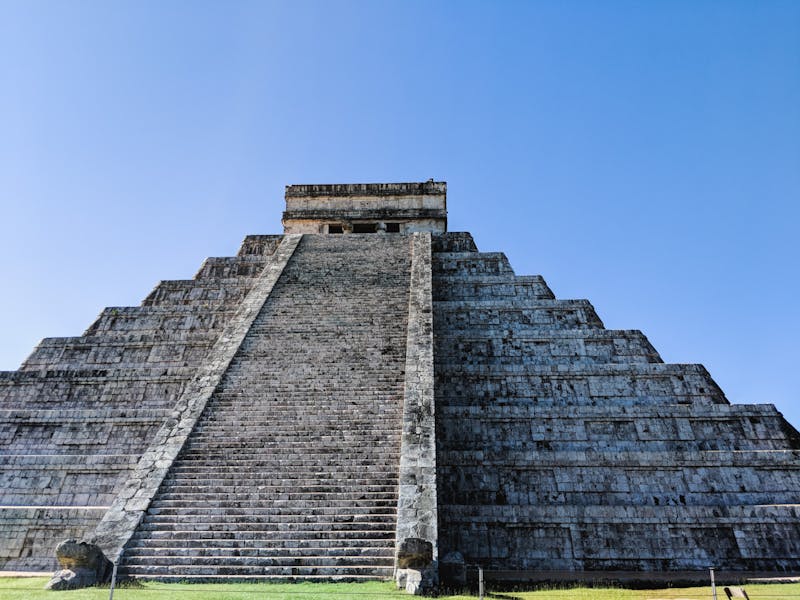 Get to Chichén Itzá before it opens

This is key. Bookmark this point for later. If you take anything away from this article, this is it!

We got up on our second day in Valladolid around 6 a.m. and headed to the town center from Hostal La Candelaria.

We were much too early for the first colectivo of the day, which left at 7:00 a.m., but this gave us time to stop at the convenience store OXO for coffees. (We love coffee!)

Before your colectivo departs, you can also pick up some snacks for the day, as most items geared toward foreign tourists may be overpriced once you get to the Chichen Itza entrance.

We made conversation with the colectivo driver on the corner, who spoke with us about Mayan ruins, comparing where we had already been (Dan, to the Aztec ruins of Teotihuacán outside Mexico City, and Becca, to the Mayan ruins of Tikal in Guatemala… much more nearby, relatively) to Chichen Itza. 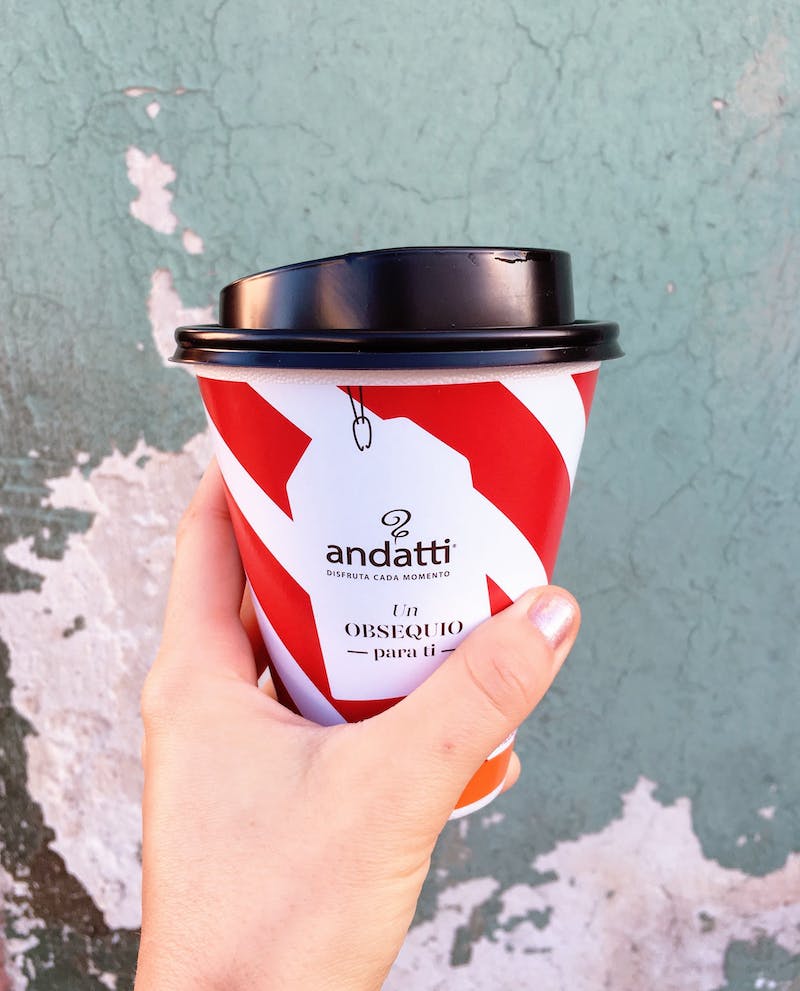 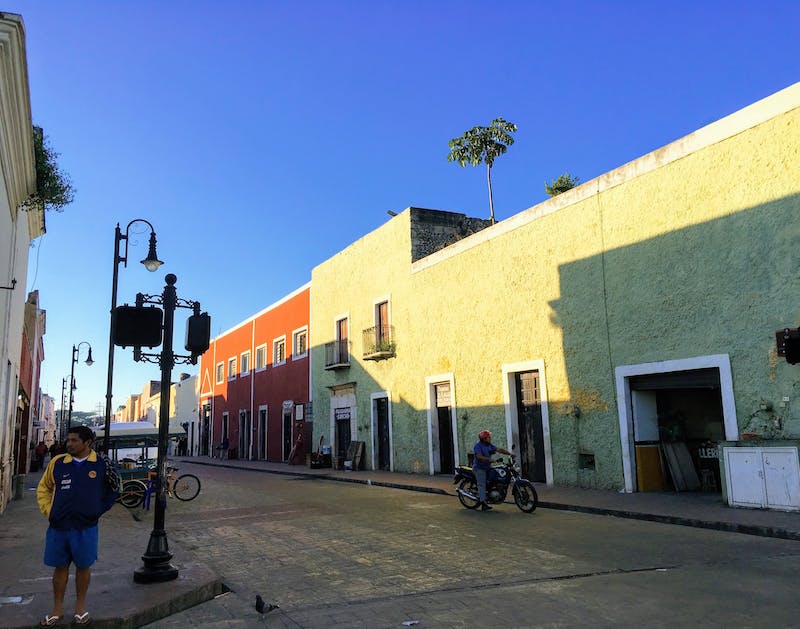 Get on the ticket line as fast as you can.

The colectivo dropped us at the entrance to the ruins, or the national archaeological park. By this point, we had already made friends during our ride, which lasted an hour. We all were pooling ideas of how to get in as quickly as possible in order to be at the front of the line.

The same practice goes for visiting the ruins of Tulum.

We waited in the ticket line before 8 a.m. and were among what seemed some of the first to enter Chichén Itzá. After quickly paying the entrance fees of 242 Pesos per person ($12.70 USD), we were in.

After seeing the pyramids, we wandered further into the patches of plants and trees. There were no other humans around. Unbelievable, for one of the top tourism sites in all of Mexico!

You may even feel alone in the jungle if you walk quickly toward the Mil Columnas and further into the smaller ruins. You’ll want to have your travel camera ready for the good shots before the sun rises higher in the sky. 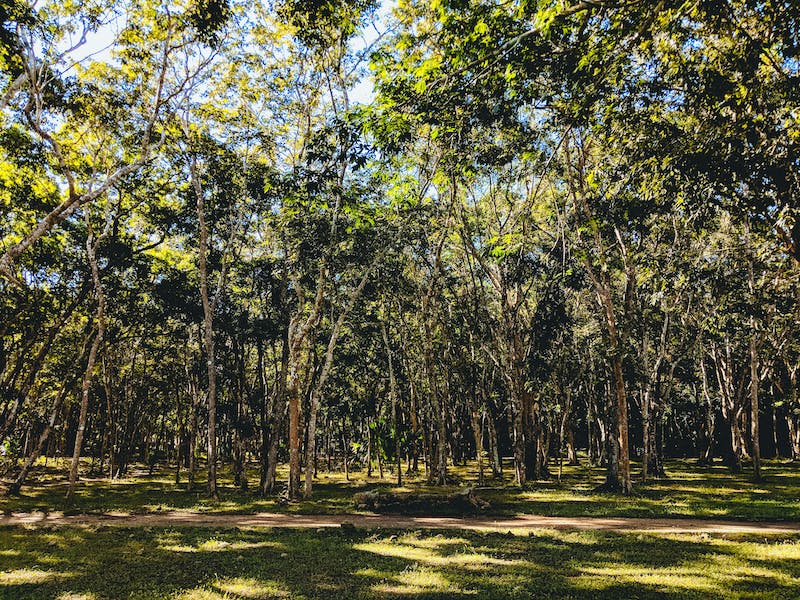 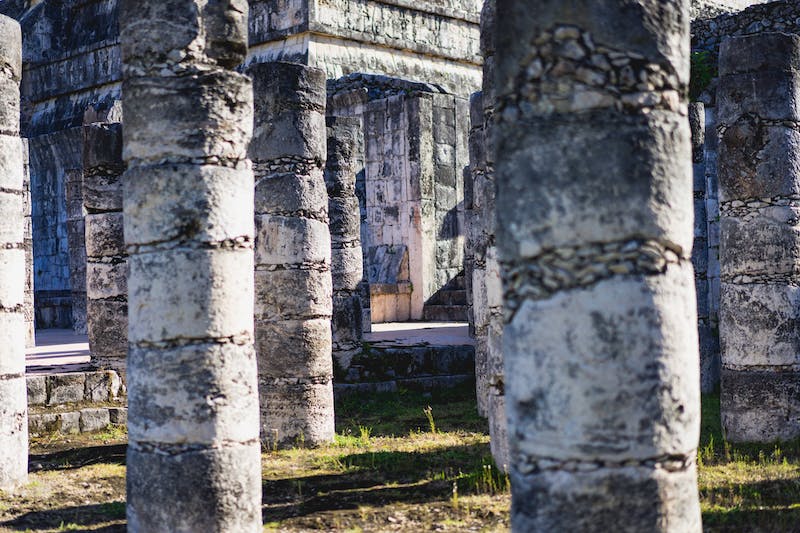 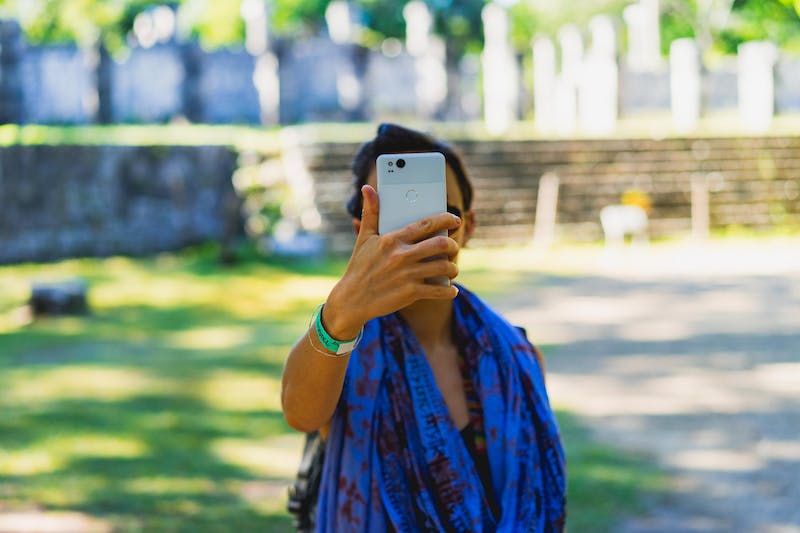 Adventure into the small patches of jungle.

After admiring the large pyramids against a perfect blue sky, we hopped in a shortcut through a small jungle, stepping over pieces of ruin (or updated reconstructed ruins) in all shapes.

We found our way to two cenotes, neither of which are for swimming, and saw some large lizards. Still… not so many people.

Look up toward stone ledges and tree trunks, as you may find lizards hanging out or sunning themselves. It’s like a safari. 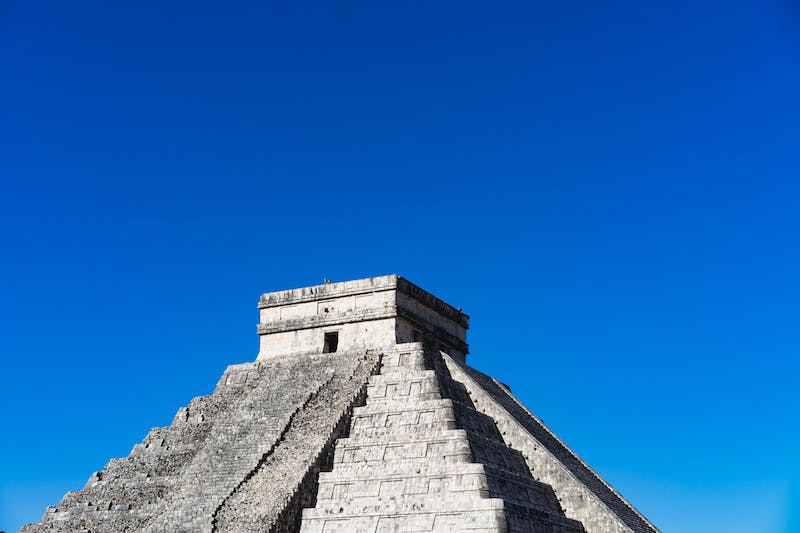 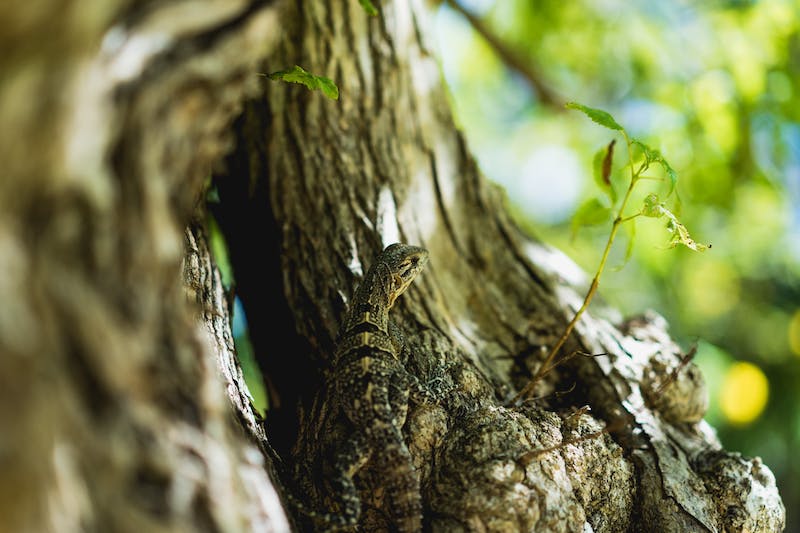 How long to spend at Chichen Itza

We spent a total three hours in Chichén Itzá and walked a bunch of miles, seeing two cenotes, which are natural sinkholes filled with stillwater, and more temples and cool stone carvings like jaguars and lizards.

We left on a colectivo back to Valladolid for the same price (35 pesos, or $1.84 USD for an hour-long ride) and were glad to see that we had been charged the same price as locals, as we overheard.

We got back to our hostel, refueled with great food and rehydrated with lots of water, and continued our lovely trip through the Yucatan (highly recommend).

So, did we beat the crowds at Chichen Itza?

As predicted, within an hour or less from 8 a.m., the Chichen Itza park grounds were nearly overrun with tourists in groups who had come on tour buses from Cancun and Playa del Carmen, known for their resorts and vacation packages.

The sun was higher in the sky, it was hot. We were baking and feeling exhausted already. Photo lighting was no longer ideal, there were vendors hawking travelers and more and more people crowded the most well-known spots.

There were groups with guides and umbrellas to beat the heat, everywhere, and luckily, we had gotten our “we are the only ones here” photos already. 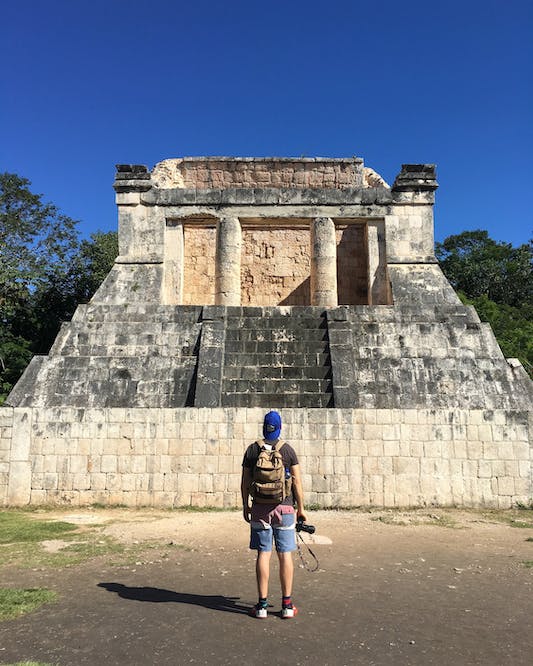 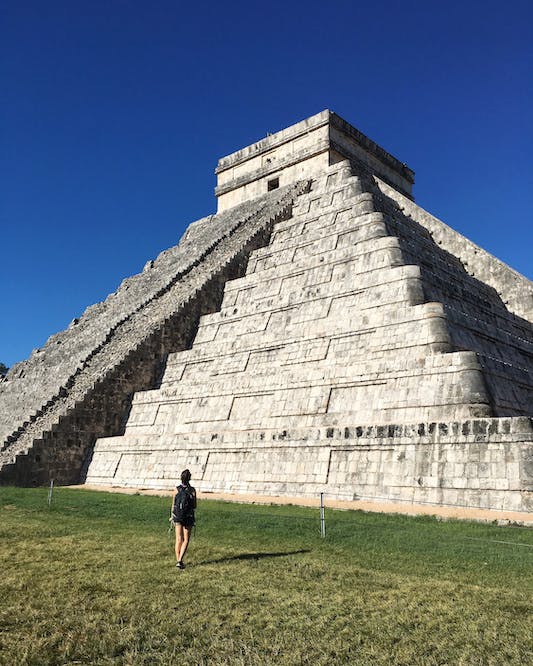 Continuing onward in Mexico? Check out our Yucatan guides for Tulum and Valladolid and bookmark our fabulous guide for Mexico City.

We created this blog to share some of the knowledge and experience that we have around travel and photography. We're currently working remotely in Brooklyn.