We were pleasantly surprised with the amount of cafes available in Taipei, Taiwan. When we visit a city, we explore through its coffee, coffeeshops and cafes. We like to take photos of coffee and enjoy seeing how locals tend to caffeinate.

We couldn’t wait to explore the scene in Taipei, and in our adventure, we learned a few crucial things about cafes in Taipei.

What to know about Taipei’s best cafes and coffeeshops

Many of the independent cafes in Taipei have a minimum per customer of one drink or food item. This is because they know people want to stay a while. Even if you are with someone else purchasing a drink or food item, you will have to purchase your own. While it’s different from what we’re used to, it also makes sense from the businesses’ perspectives.

Beverages at the independent cafes of Taipei are often priced much higher than we’d typically expect, relative to the cost of living in Taipei. We mentioned to locals that we saw menus with pots of tea for USD 6, cappuccinos for USD 5 and a simple americano for USD 4 or more. These prices are more than in NYC! The reason here is also that the independent shops know that people with laptops may stay a while, so there’s a premium for that.

Many cafes in Taipei open late and close late, which is pretty different from the open hours of our favorite cafes at home in NYC. While venturing down Yongkang Lu looking for our cafe of the morning, we found that only two in the area were open. While expecting all cafes to open at 7 am or 8 am (for coffeetime, naturally), this is not the case. Many open their doors at 11 am or 12 pm, but remain open until 10 pm or 11 pm.

Traveling to Taipei? Get a pocket guide by Lonely Planet to help you see even more places around the city! Get one on Amazon or Bookshop.org.

Gingin is SO Instagrammable. Gingin is a charming new and trendy cafe closest to the MRT at Zhongxiao Xinsheng on the blue line. Popular among young people and locals, Gingin is an excellent place to have a great coffee. You can also settle down with a laptop for a while.

We tried the americanos, and they were among the best we had in Taipei. What we liked about Gingin was the large amount of natural light coming in through the windows, the back patio, the friendly staff and the laptop-friendly environment. We’d love to come back and take more photos. 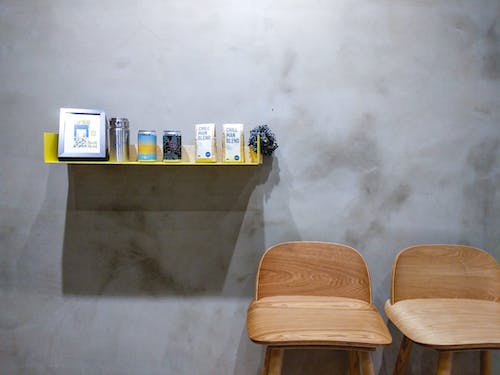 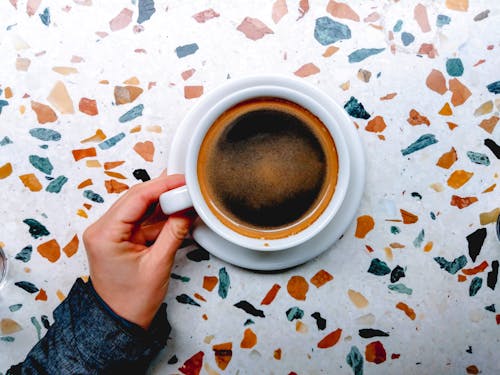 Coffee Z was a good find, as we mostly went off of photos of its interior before we headed there for some work time. Coffee Z has a list of coffee drinks, some dessert food and an entire upstairs floor with tables and chairs that are ideal for setting up your laptop with minimal distractions.

There are no strict policies with minimum items per customer, and guess what - they open at 7:30 am on weekdays (11 am on weekends). Proper coffee time! 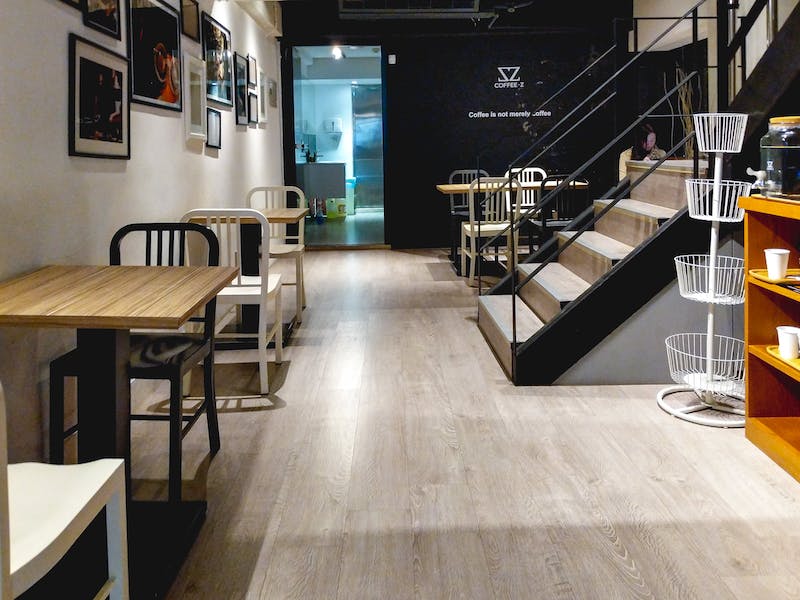 Louisa Coffee is a local chain that we discovered and became quite happy with. We first found Louisa on our first full day of walking around Taipei, and were so happy to have hot americanos (for 45 NTD) and a bagel(!!) with peanut butter for Dan. Service is fast and the baristas were friendly.

You can find Louisa Coffee all over Taipei, but beware - the locations are often very busy and it could be hard to find enough space for both you and a friend.

Also beware that they don’t have a private WiFi network, so when we went there for working, we used our own hotspot or the free Taipei city WiFi.

‘Ecole Cafe is a chic space with lots of natural light, fast WiFi, a patio out back and reasonable prices. Best of all, they have a nice jazzy soundtrack playing in the background (Becca’s favorite). 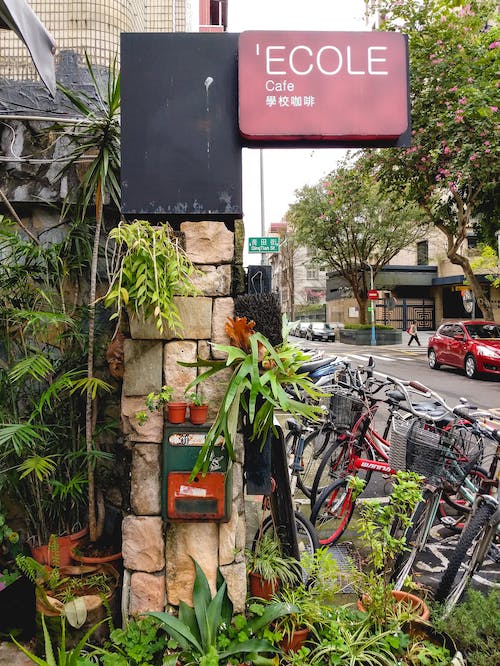 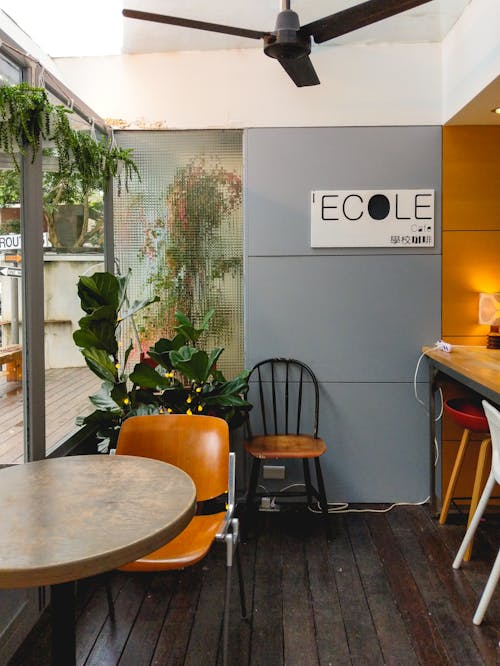 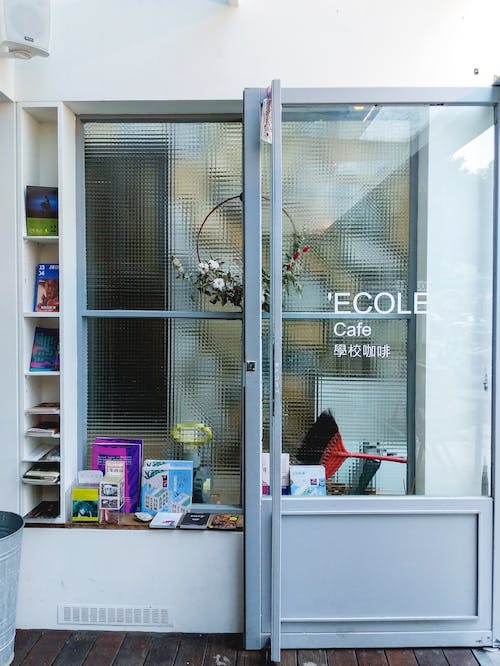 There’s food and coffee, and we had the americanos. Staying for two hours seemed fine with the staff, and there were other people working on laptops, reading and writing. We would’ve liked to have tried the food too. 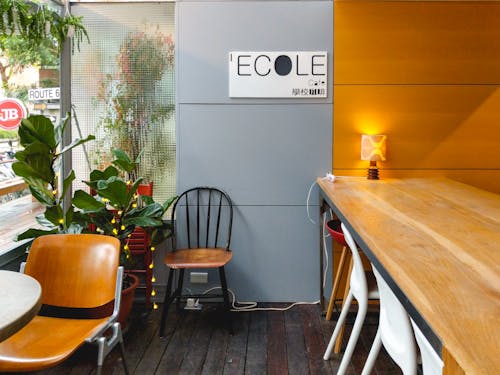 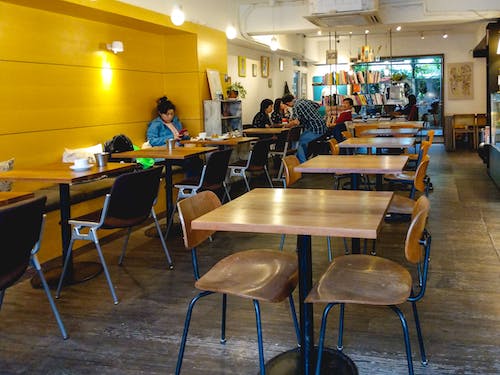 Two Shots has its location going for it, as it’s right next to an exit of the Dongmen Station on the red line. Inside, you won’t find much seating. We were lucky to land the two stools at the bar.

Prices are very reasonable, and we had the americanos for 45 NTD each. This was among the best price we saw among all the cafes we tried.

They have their own WiFi network, and it worked fine. To note: they do not have a bathroom, and if you need one, they will direct you to use the restrooms in the MRT station below. This is because the coffeeshop connects to a guesthouse, which seems to have its own private restrooms for guests.

We had the americanos and they were satisfying. Due to the cafe’s small size, we felt like we shouldn’t stay forever, so we only stayed for an hour and a half. Roaster Family Coffee isn’t necessarily a good place to spend an entire afternoon, but it’s a nice stop if you’re out and about.

To note: there is a strict “minimum one drink per customer” policy… emphasis on ‘strict.’ 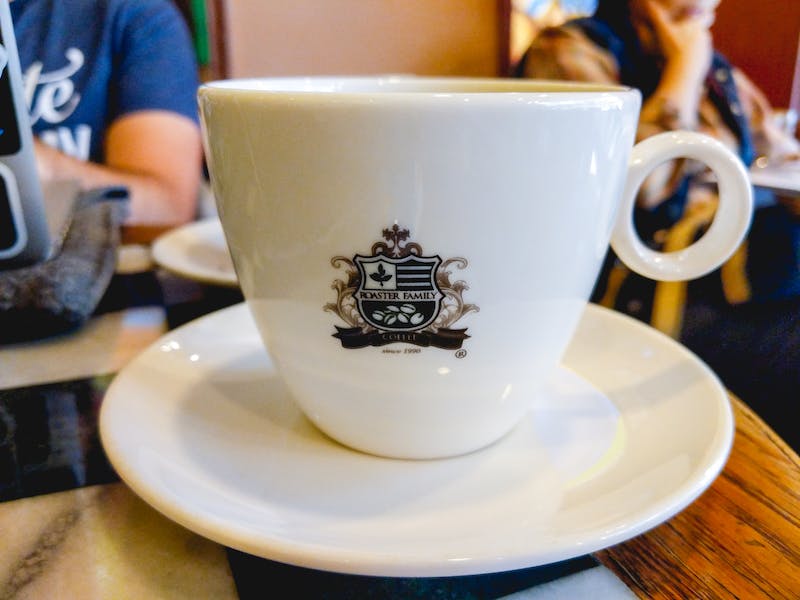 We were delighted to find 515 Cafe & Books, which reminded us of a study, a living room and a bookstore. There is a large array of seating, from dining tables to couches and big chairs near coffee tables. During the morning when we visited, there was a large group eating brunch and some other people studying.

The cafe has two cats, Youzi and Juzi, who get their own section of the menu. The cats roam freely through the cafe and it’s pretty cute. 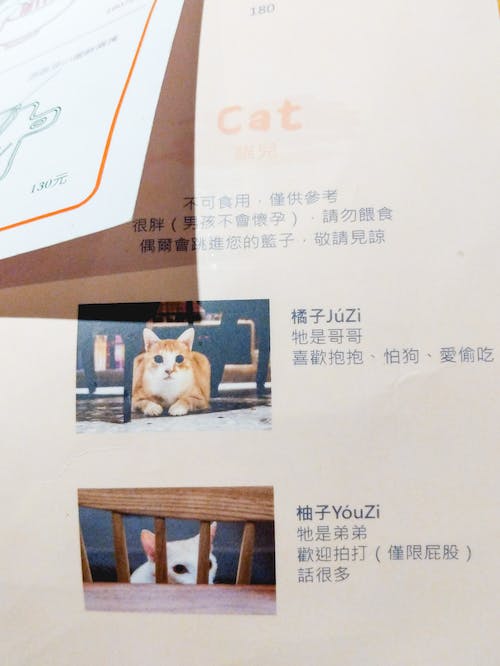 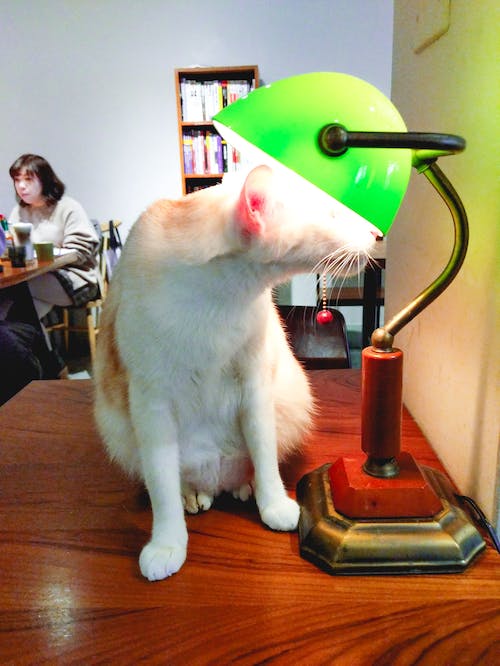 In addition to lots of drinks and teas, they have a brunch menu of all sorts of food. Prices were standard for the Yongkang neighborhood, with drinks between 120 and 150. WiFi was great. There’s drinking water for unlimited consumption, which is a nice thing to have for customers.

Settled Cafe came recommended to us after we accidentally stumbled across it one day while touring Ximending. Settled opened in 2018 and stands out for its sleek white interior.

Staff was very friendly and served us a new pitchers of drinking water as soon as we finished the first (we appreciate this, as mentioned above). I had the espresso and Dan had a cold brew. Drinks were great.

The cafe has its own WiFi network, and it seems laptops are welcome, although we were the only ones who set ours up when we visited. They’re open in the evenings, usually until 9 pm (except Sundays). 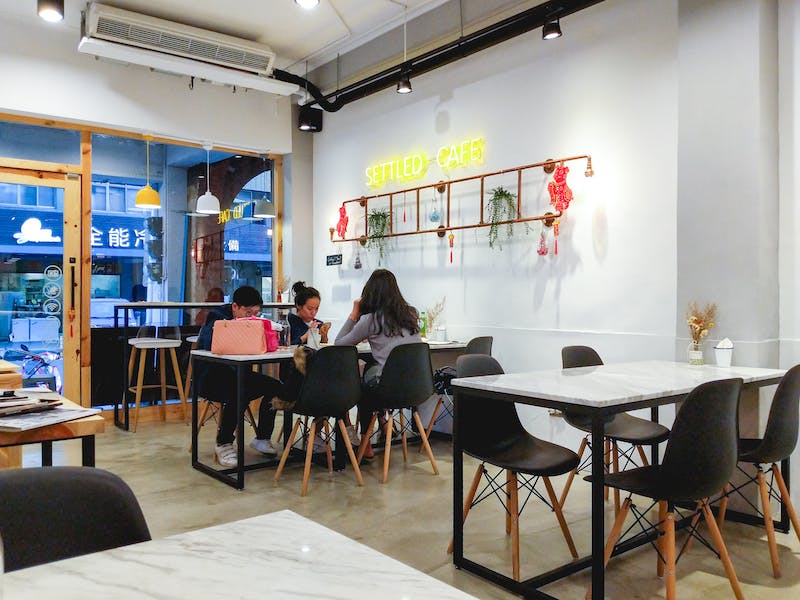 Homey’s Cafe is a wildly popular cafe and bar that we found because we were looking for a place to cozy up in the area.

The place functions more like a restaurant, although you can order as little as one drink (juice, coffee or tea). When you arrive, a host or hostess will seat you where there’s space (or maybe this was because we showed up on a very busy weekend afternoon).

Homey’s is located in an apartment converted into a cafe, so there’s different rooms to sit in, lots of couches and varied seating. The WiFi was alright. Lots of people had laptops or were on talkative dates with friends.

Prices were on the higher end for a cafe, between 110 and 180 for most drinks and foods. To note: the cafe is cash-only.

We spent nearly three weeks in Taipei, but it wasn’t enough time to visit all the cafes on our list that are located throughout the city. If you have the time, or if any of these cafes are near where you’re staying, we recommend checking them out! (Then, let us know how it went).

Located in Da’An District, visitors note that this is a good place to spend a few hours studying or working and it’s very quiet.

Known as a friendly place with big windows, this cafe is a favorite in Da’an District for its great food and wonderful atmosphere.

Kafka by the Sea (海邊的卡夫卡)

This cozy spot is located in Zhongzheng District. There’s a discount if you order a sandwich + drink set. There’s a cozy wooden atmosphere.

We can’t figure out the name, but it was interesting enough to go on our list. This cafe is located in the cluster of cafes on Yongkang Street, Da’an District, and people say it’s cozy with outlets and WiFi as well.

Known as a little cafe in a rather quiet section of town, this coffeeshop is based in Zhongshan District.

Well-known in Da’an District, it’s a spot for a light lunch and a coffee. There’s a small porch for some outside seating.

A favorite in Songshan District, we’d go with “LeLe Coffee” if we had to translate its Chinese name into English. They have a simple atmosphere and comfy seats.

We were drawn in to look at this cafe by the fact that it looks special – artistic atmosphere, great ambiance and nice deco. Each table has a sketchbook with pencils!

Cool, chilled and intimate, the cafe is located in an alley of Da’an District.

This cafe is a cozy and trendy place to meet friends or coworkers, and located in Zhongshan District.

Looking for more things to do, see and eat in Taipei? Check out our complete Taipei travel guide. 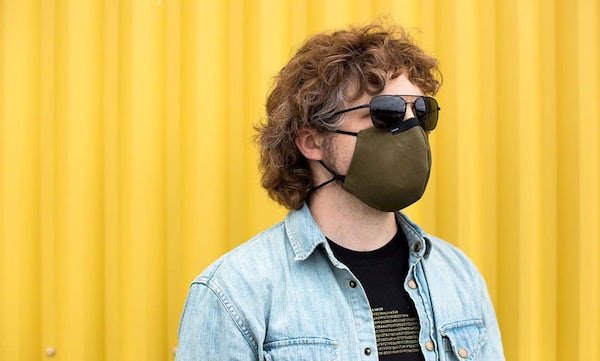 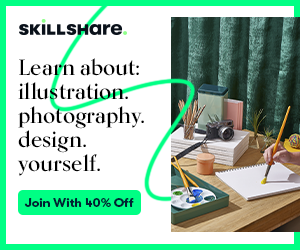